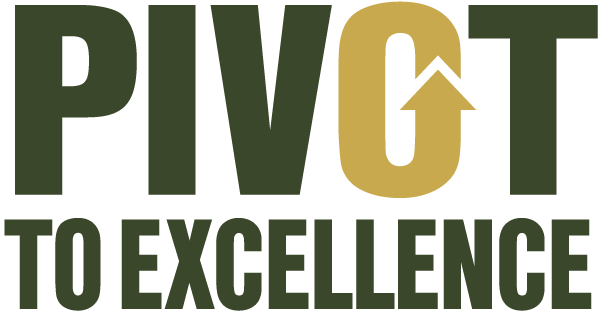 The PIVOT TO EXCELLENCE Executive Symposia and Summit Series was a collaborative effort between CRANK Digital Marketing Authority and the Suncoast Chapter of the Association of the United States Army (AUSA), which supports the entire US Army Family in the Tampa Bay Area and West Central Florida.

In partnership with AUSA, we produced six virtual events in the first two quarters of 2021, including:

Cynthia Newman, CRANK founder and CEO, was a featured panelist on two of these events: Women Entrepreneurs & Executive Leadership and the Southeastern Army Medical Symposium.

To create a dynamic webinar brand and webinar activation strategy that accommodates a wide range of partner goals, launching with the AUSA Suncoast Chapter.

We wanted to create a naming convention and visual brand identity for our new webinar initiative that represented the brand essence of CRANK while serving the current needs of AUSA — along with a diverse range of business categories in the future. No easy task!

We selected PIVOT TO EXCELLENCE as the brand name; it is broad enough to fit a range of webinar categories in the future while offering a high-impact identity. As for the design, we used the same font implemented in our CRANK brand logo and integrated additional visual consistency with a similar arrow treatment. The logo colorways and tagline are designed to be customized to the webinar partner or sponsor, so we implemented an army green and gold for AUSA to resonate with their brand.

… thank you for making our chapter and events like this look great. Thank you and your staff for all of the work, talent, knowledge, and skill that are put into creating an attractive and sharp invitation, links, etc like this.

We needed an evergreen hub to house webinar descriptions and registration details as well as post-webinar replay links.

Rather than build a separate microsite for PIVOT TO EXCELLENCE, we opted to house the information within our CRANK website for brand consistency and efficiency. (No need to reinvent the wheel in this case!) Our new Webinars page features graphics and descriptive text for each webinar along with the registration link — and YouTube link to the replay.

“On behalf of The Patton Foundation, I would like to personally commend you on your fine contribution to our PIVOT TO EXCELLENCE Women’s Entrepreneur & Executive Leadership Summit.  Your amazing qualifications and experience not only inspired our viewers, but will undoubtably activate generations to come of potential leaders who emulate and apply your wisdom and verve to challenging times such as the ones we now face.”

“Thank you for including me in this very important series. As I have mentioned several times, the Yom Kippur War of October 1973 had a profound effect on the U.S. Army – the Army I spent my entire career in. The lessons learned by both the IDF and the U.S. Army during and after 1973 made both armies the best in the world and have kept our nations safe.  Frankly, we are still learning important lessons from this conflict. Hopefully, I will be able to join you next year in Israel to return to the sites of these historic events.”